On December 14, 2019, a memorial service was held for my father, Ulysses Percy “Pete” Joyner, Jr., at Trinity United Methodist Church in Orange, Virginia. I shared this witness to his remarkable life.

The last time my father remembered seeing his father was on an evening in May 1940. The family was reeling from the death of dad’s youngest brother, Herman, who died at the age of 1. My grandfather was on a bed on the porch of the house near Capron where they lived. He suffered from tuberculosis and had spent a lot of time away from the family in Catawba Sanitarium, which he finally left, against the advice of the doctors and the authorities.

My dad was getting ready for a school trip the next day. The first grade was going to Norfolk to the zoo. My grandfather hugged him and handed my dad a shiny, new Walking Liberty half-dollar. It was the first money he had ever had to call his own.

The next day he went to the zoo and when he came back, his father was gone. The sheriff, on orders from the Welfare Department, had ordered my grandfather to be committed to the State Hospital at the State Farm in Goochland County because they blamed Herman’s death from pneumonia on my grandfather’s TB. A year later he died at the State Farm.

You know, come to think of it, that’s a pretty depressing story to tell at a memorial service. But when I think about my dad’s life, much of it springs from that day on that porch. My dad spent a lot of his life trying to sort out who his father was and what he received from him beyond that silver half-dollar. I have a feeling I’ll be doing a lot of that in weeks to come, too.

I have memories of Dad taking me fishing and bowling, but my most vivid memories, and the ones I cherish the most are of cemeteries and courthouses. The two of us would go off trekking through old stones slanted in the ground, unreadable, at the corners of winter fields and overgrown in scraggly forests, searching for where these unknown kinfolk lay and searching for what family means. We’d spend hours at clerk’s offices in county seats across the state where he would pore over old books with faded handwriting while I played on stacks of cannonballs on the courthouse grounds or watched him as he worked, wondering what stories he would have to tell on the way back home.

Dad stitched together a world through the stories he told. In the stories those buried ancestors came alive in all their messy reality. And he also told fantastical tales about the land we walked over—headless dogs running across moonlit peanut fields to warn of an impending death, talking animals on the Rawls Farm where he milked cows, strange residents living deep in the heart of the woods who imparted wisdom but could never be found again. All those stories made me believe that our family was exceptional, despite its poverty, and that the world was as rich and wondrous as a boy imagined it was and Southampton County more than any other place.

I’m telling you this because it’s all I know to do. I can’t sum up my father. He was so many things. A scholar. A U.S. Army veteran of the Korea conflict. A civic leader. A historian. A state elections official. Attorney. Clerk. Curator. Churchman. A writer. I even once found a poem, his, that he kept in his desk.

But it’s the yearning in him that I’ve always connected to. The desire to know how this family got here and beyond that to know why. To dig beneath the surface to discover the roots and the something more. The impulse came from a big hole in his heart but it led to something beautiful—our family today.

And here’s the one big secret that dad knew, even though his absent father may have been the spur: he was always sustained by strong women. When his aunt Bess, only two years older than he was, died a few weeks ago he added on to the RC Cola and Baby Ruth part of his birth narrative by saying that she was the first girl he saw from his bassinet in the back of the gas station. “She always took care of me,” he said, “and now she’s gone on ahead because she’s going to take care of me again.”

His mother, Gertrude, my Grandma—God couldn’t have made a stronger woman. Holding that little family together through the Depression, picking cotton, shelling peanuts, hauling trees out of the forest and chopping them into firewood, and making three boys believe they had a different future—which they did. And doing it with such quiet, deliberate, overwhelming love (and a pretty mean caramel cake recipe).

And then, when my dad came back from Asia and the Army, and began working in the paper mill, when he came back home in the evening to lie in a hammock, he had the good sense to see that the neighbor girl chunking chinaberries down at him from the tree above was the miraculous gift he would need for all that would come later. Eight years younger. Like his mother, she had had to grow up faster than she should have, but just like her, made of steel. Dad knew a strong woman when he saw one and there is nobody like my mama. These last few years have shown what we knew, he knew, all along—she was a treasure beyond compare. 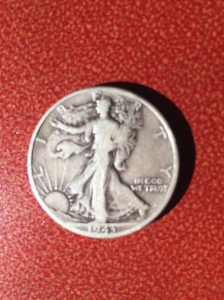 My father took that half-dollar to the Norfolk Zoo and with all the temptations that such a place can offer to a 7-year-old, he refused to spend it. He held on to it because…his father had given it to him and told him to spend it wisely. (He later spent it on a Shirley Temple coloring book and some crayons at the Sebrell store.)

But how much more have I received, have we received, from my father. There is no way to count all the riches. What he gave me was an appreciation for the redemption contained in every kernel of loss, for the memory and spirit that remains in a place, for the power of love, and for the strange ways that family hurts and, o my, heals.

The half-dollar he held in his hand that day shows Liberty, a strong woman, striding confidently toward the rising sun on the horizon. I have just enough faith to believe that that’s what Dad is doing now, too. He is Walking Liberty with the Risen Christ who brings us home. Thank you, Dad, and thank you, Jesus.

The son of the late Ulysses P. Joyner, Sr. and Gertrude Bryant Joyner, he was born in Courtland, VA on November 11, 1932. A veteran of the U.S. Army Security Agency (Korean Conflict), Joyner, was a member of the American Legion, Post 156.

He attended Virginia Tech and received degrees from Richmond College and T.C. Williams School of Law at the University of Richmond.

Joyner joined the firm of Somerville & Moore in Orange where he practiced for 20 years. In 1982, he was appointed Clerk of the Circuit Court of Orange County to succeed long-time Clerk, Henry C. Dejarnette. He retired after serving 17 years in that post. During his law practice, he served as the first County Attorney of Orange County and as attorney for the towns of Orange and Gordonsville.

An active civic leader, Joyner served as President of the Orange County (OC) Chamber of Commerce, the OC Jaycees, the OC Lions Club, and the Piedmont Bar Association. He was a former director of the Montpelier Property Council and the James Madison Museum.

He was an accomplished historian and author of six books and other treatises on Orange County and his native Southampton. He was a charter & life member of the OC Historical Society and was founding Chairman of the OC Bicentennial Commission, the Constitution Highway Association, and the Greater Orange Association (now the Downtown Alliance).

Joyner was a long-time member of Trinity United Methodist Church in Orange where he served in numerous roles including Chair of the Administrative Board, Trustee, Treasurer, and Certified Lay Speaker.

6 responses to “In Memoriam: Walking Liberty for Pete Joyner”