This article originally appeared in the great Topology magazine. We were in danger of becoming a caricature.  When a parent stood up at a local school board meeting and expressed her dismay at a word being used in two books in the school library, blogposts and news stories from New York to Singapore decried the benighted censorship emanating from our Virginia backwater county.  Because the books were Mark Twain’s Adventures of Huckleberry Finn and Harper Lee’s To Kill a Mockingbird.  But the word was ‘nigger.’

219 times in Huck Finn.  48 times in Mockingbird.  That’s how many times the word (along with other slurs) is reported to have been used.  And oh, the power of the word.  “What are we teaching our children?” the mother, who has a biracial child, asked the school board.  “We’re validating that these words are acceptable, and they are not acceptable by any means.”

Do we neglect the power and the potential of great literature by simply pointing to it but never truly embracing it?  I didn’t want to fault the parent who dared to ask.

The school system could have responded by following their recently adopted policy which asks that a “Request for Reconsideration of Learning Resources” form be submitted to the school and be considered through a process that would not require immediately pulling the books.  But our schools, like so many of our institutions, have so many policies and the heat of the moment is often quite hot.  So the books were pulled and in the week that followed before their reinstatement, Accomack County became an international symbol of censorship with its accompanying heaps of opprobrium.

There were upsides to the controversy.  People rallied on the courthouse lawn to protest.  When is the last time that people rallied in defense of literature?  Our local independent (and only) bookstore put Mockingbird & Finn on prominent display and sales spiked.  The owner was interviewed when TV crews came to town.  The local (and only) community theater sponsored a dramatic reading of the play based on Lee’s book.  All in all, it was a boost for the arts.

The question raised didn’t fall along simple lines, either.  How do we offer these books with their shocking words to our children?  What sort of context should we give?  Is the freedom of a library book shelf enough?  Or do we neglect the power and the potential of great literature by simply pointing to it but never truly embracing it?  I didn’t want to fault the parent who dared to ask.

What stuck in my craw, though, was the way my community was flattened by the media coverage.  It’s been happening all fall.  As pundits try to make sense of the election and the roilings of rural America, it has been easy to imagine the region as one vast, undifferentiated, splenetic mass.  And places like Accomack County are one more dot of crimson in the faceless sea of red.

As pundits try to make sense of the election and the roilings of rural America, it has been easy to imagine the region as one vast, undifferentiated, splenetic mass.  And places like Accomack County are one more dot of crimson in the faceless sea of red.

So when the book controversy arose, we suddenly became another piece of evidence for the yawning divide between the enclaves of enlightenment and the continent of disgruntled whites malnourished by their steady diet of fake news.  Not that there isn’t a divide.  Lord knows, the distance from here to the Northeast Corridor seems to grow by the day.  Economic dislocation, declining educational opportunity, racial tension, opioid abuse – they all take their toll.  But we don’t get better by being exotic objects of remote observation.  Or by turning ourselves into such a thing.

Rural is plural.  That’s the thing I know from my life in the rural South.  I’ve had my run-ins with the kind of small-mindedness that lends itself to easy lampooning, but I’ve also been nurtured and challenged by big-hearted, poetic grandeur from the likes of English teachers, non-profit leaders, and country church choirs.  I grew up with and live with dreamers and everyday artists.

If we have a way forward beyond this time of crucial divide, it wo 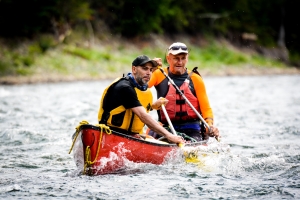 n’t be because certain regions hunkered down in their bubble and withstood the assaults coming from the other bubble.  The way forward has no red or blue hue.  It has the character of a river running right through the heart of a land on which unlikely companions seek a new day of freedom and adventure.  And on this journey we will share our best and worst selves, in language coarse and beautiful, with people who come from very different circumstances but with transcendent desires.  Someone should write a book about that.