One of the dynamics that happens in marginalized places, (and I’ll count the Eastern Shore, where I live, as one of those), is that the people who live in them can internalize that marginalization and begin to believe that nothing significant ever happens there.  Or we latch on to narrow stereotypes of what the region is about, (in our case, oysters and pony swims), and make them carry too much weight in establishing a communal identity.

So hooray for the National Park Service for returning Harriet Tubman to us as a reminder of the subterranean currents that have formed this place.  When the new National Historical Park opened up near Cambridge, Maryland recently, Suzanne and I went to check it out. 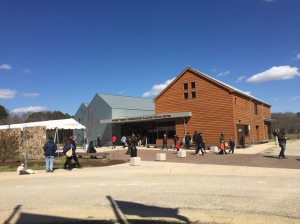 The neck (peninsula to most) where Tubman grew up is still a marshy, pine-studded piece of land.  But it was home to a slave economy that once dominated the region.  Mid-Atlantic slavery was sometimes downplayed as a less harsh version of the deep South model, but the stories in the museum make clear that there were terrors on the Chesapeake to match those of the cotton plantations.  Families were rent and punishments rendered that left enslaved peoples physically and psychically scarred.

There were terrors on the Chesapeake to match those of the cotton plantations.

The museum is heavy on narrative and visual representation because there are so few artifacts left from the time.  But it is effective in giving the visitor a taste of Tubman’s faith and grit and determination to liberate her family and anyone else who would follow. She said, “I was free and they should be free.  I would make a home in the North and bring them there, God helping me.  Oh, how I prayed then, I said to the Lord, “I am going to hold steady on to you, and I know you’ll see me through.”

Tubman’s visions of God leading her and others to freedom began when she was hit in the head by a metal weight hurled by a white man in anger across a country store.  Like some scene out of a Flannery O’Connor story, this sudden act of violence was a revelation of God’s redemptive purposes for Tubman.  She wrote a song for the day she left which has all the elements of a spiritual.  “I’ll meet you in the morning, safe in the promised land;/on the other side of Jordan, bound for the promised land.”

She was caught up in a biblical story that gave meaning to the one she lived.  The promised land, despite the colonists’ dream, was not the Eastern Shore, nor even Philadelphia where she fled.  It’s a place approached in song and faith.

When the sun sets across the Chesapeake Bay, it is a beautiful sight.  It can make you feel that all is right in the world.  But there are troubling things below–discontent nurtured by a biblical narrative of redemption and release.  Today, the Underground Railroad may be led by Latino Tubmans who know there is a promised land, and it’s not the same as ‘here.’