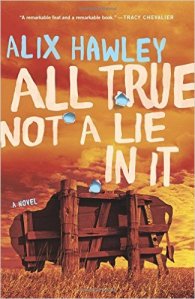 Alix Hawley is the author of All True Not a Lie in It (recently reviewed here), a creative re-visiting of the pioneer and American cultural touchstone Daniel Boone.  Hawley teaches at Okanagan College in Kelowna, British Columbia and this debut novel has won her the Amazon.ca First Novel Award along with a lot of acclaim.  Always interested in folks who are reimagining the American landscape and the people who are formed by it, I asked her for an interview and I didn’t even mention Fess Parker once.  (At least not directly…)
What sparked your interest in Daniel Boone as a subject for fiction?  Hasn’t he been picked over enough by pop culture?
I talk in the preface about suddenly remembering a 1985 National Geographic drawing of Daniel by Jack Unruh. It struck me so hard that I started looking into the history, knowing little. I saw then there hadn’t been many books about Daniel Boone for quite a while, aside from biographies.
If people know his name now, it’s often from the 1960s TV show, which I never saw (and haven’t had the heart to watch on YouTube). And many people don’t know the name at all. So I felt I had a clear field, in a way, to take a fresh look at a person whose life was totally outside my own experience and literary background. As wacky as it may sound, I feel the story chose me.

Your Boone is a dreamer who gets carried away with the idea of Kentucky as Heaven.  Did he become that way through the course of discovering the character or are there things you found in doing research that opened up that side of him?
That’s my version of Boone talking. His religious life became an important background to the novel, though, as I did the research. He grew up Quaker, which I hadn’t known, although his family weren’t particularly good Quakers (no spoilers!). Biographers suggest he retained some spiritual beliefs all his life, though he never joined another church. In my book, Kentucky represents a fresh world for him in many ways, a blank slate. But slates are never truly blank.
The Daniel Boone you conjure is a bit of a trickster, it seems to me.  Especially in the scenes in the second half, he is playful and needles Chief Black Fish in a way that seems daring.  This really opens the door to building something of a relationship between them.  How do you see their relationship working?

I think he enjoys being tricksy and playful, and the record shows a fondness and even love between the two of them, as unlikely as it was in that place and time. Their similarities interested me–they were close in age, both “big men” among their communities, trying to keep peace and make things work. The father-son connection also pulled me in. What’s it like to create that kind of bond to replace ones you’ve lost?