The Future is Print: An interview with Ted Shockley, part 1 of 2

Last week I got my hands on the second edition of Eastern Shore First, the new, local, free paper in our community.  People will tell you that newspapers are dying, particularly those that rely on old-fashioned print.  But Ted Shockley, the visionary publisher (and writer, editor, photographer, and marketing department, among other things) of ESF is somebody who believes in the importance of community and the place of a local paper in helping create it.

I sat down with Ted at the new Crossroads Coffee Shop in Onley recently to interview the interviewer.  (Ted has a long history in the local newspaper business, primarily with the Eastern Shore News.)  I found someone who is unabashedly upbeat, from his affirmation of local businesses to his psychedelic pickup truck that he is painting with his son.

He is a bit of a homer.  Don’t get him started on Guy Fieri and why he won’t be eating at the Food Network star’s new Norfolk restaurant.  (Hint: How many times has “Diners, Drive-Ins & Dives” come to Delmarva? Bigger hint: None.) But talking to Ted I was grateful for those who see the possibilities of this place and operate out of that vision.

So, how do you describe what you’re doing?  What is Eastern Shore First? 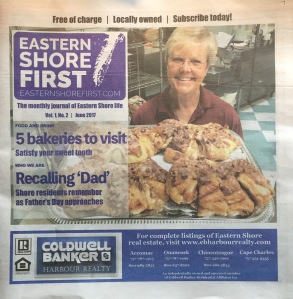 It’s just a vehicle, just a truck that picks up the good stories of this community and the good businesses of this community.  It transports those stories and those businesses to a big audience.  There are so many really neat businesses around here and there are so many really neat stories around here.  They need that transportation that a monthly, upbeat publication can provide.  So, it’s really just a box truck of stuff that I distribute, that distributes the stories.

But it’s not a Chamber of Commerce publication.  It’s a lot more than that.

There’s a difference between a “chamber of commerce” publication and our [Eastern Shore] Chamber of Commerce publication, which are really directories of businesses and services.  And they’re particularly well done.

So, it’s important that this be different from that.  The term ‘Chamber of Commerce publication’ means that the sun is always shining and everything’s always great, and lives usually aren’t that tidy.

So, I can foresee this [paper] talking about challenges overcome, but you talk about the challenge, too.  The Shore certainly has those.  But the people that I’m spotlighting next month…they’ve overcome challenges that have happened in their lives, and they’ve persevered, are doing well and have a story to share.  Maybe that’s different from ‘it’s sunny all the time.’

This is decidedly upbeat.  There are very good journalists and very good publications on the Eastern Shore that write about critical issues that might not be upbeat, and I don’t want to replicate what they do.

But do you think of this as local journalism?

Yeah, there’s a journalistic aspect to it.  The stories are chosen independent of outside influence.  So, that makes it journalism to me.  Journalism could take a wide range of forms.  It doesn’t necessarily have to be Watergate.  It can be an education to the public.

So, for you, what makes a good story for this paper?

For me, they’re the stories that are quintessentially Eastern Shore.  They’re the stories about businesses, about people, about the environment, and about our geography that affirm why I like to live here.  There are a lot of little stories and I think that they define why a lot of people like to live here.  We look through these publications like this and say, “This is a good community because of these people, these businesses, because of this geography, because of these natural resources.”  And it’s kind of fun to know more about that if you like it.

Even when I was a kid, I enjoyed reading the local paper. I looked to the local paper to really describe what a community is—the Zeitgeist of the community.  I wanted to create that.  I wanted to create a paper that, when people read it, they say, “This is my community.”  Not just the one percent of the people who really make bad decisions and that gets them publicity–because that’s what newspapers do.

If it bleeds, it leads.  And I’m glad that there are newspapers that do that, but this publication is not that.

I wanted to create a paper that, when people read it, they say, “This is my community.”

So, what’s changed about the Shore from when you were young?

I am taken aback by the really neat places that are on the Shore today.  There have always been some really neat shops and stores on the Shore; but, Cape Charles all the way up to Chincoteague, there are these places that you find in resort towns, these amenities that have come about since my childhood.  If you try hard enough, you can almost live on the Eastern Shore full time as if you were in a resort town.  There are places on the Eastern Shore of Virginia that you can get probably the best slice of pizza that you ever wanted.  Coffee shops.

Wonderful, well-run restaurants from one end to the other.  The artistic and the musical scene seems to explode more each year with this array of offerings.  You could literally listen to live music seven days a week, several evenings of the week on the Eastern Shore.

It’s not really growth as people would define growth.  Growth has a negative connotation.  It’s really a coming-of-age of a community.

It used to be opening up a McDonald’s on the Eastern Shore was a big deal.  These days, opening up a new pizza shop is a big deal.  People are coming up with creative ideas on food, and on the arts, and dances.  They’re really working hard to make them come true and I love watching it.  I want to help.

One response to “The Future is Print: An interview with Ted Shockley, part 1 of 2”