What’s the import of a church closing?  We struggled with that question last Sunday at Berea United Methodist Church as we held its final worship service.  I offered some words for this country church that has been at the center of a small Virginia town, New Church, for 132 years…

When I was young, I used to love to go on short trips with my dad.  Sometimes, he’d take me bowling and that was great.  Very occasionally he’d take me fishing at the lake, but he wasn’t much good at that and neither was I.  Our best trips, however, were when we went to cemeteries.

Now, I get it that you might find that strange.  After all, cemeteries have a reputation for being creepy places, especially for kids, and while we’re grateful they are there, there are usually not places where people hang out.  They’re definitely not on the list of top places fathers take their sons.

But I am so grateful that my dad did.  My dad’s passion during the years when I was growing up was genealogy.  I’m not sure what fed that passion for him.  Maybe it was the fact that his own father had died when he was only 8 years old and he was trying to piece together a family life he never had.  Maybe it was the fact that he grew up in Southampton County, Virginia, a place where history haunts every corner and peanut field. 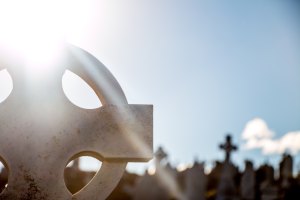 Whatever it was, my dad was always looking for lost relatives.  And a lot of the lost kin folk were in overgrown cemeteries, sometimes hidden in groves of trees or tall grass.  Sometimes with stones that were so weathered that you’d have to rub them with paper and a crayon to decipher the names.  Sometimes there were only small rocks with a set of initials painted on.

Something important was happening as I tramped around these places with my dad.  He was teaching me the importance of connection to what had gone before.  He was telling me who my family was even as he was learning himself.  He wasn’t just recording the dead, he was putting us, the living, within a tradition that was still moving ahead.  I learned how to love my dad and how to tell stories about life in those cemeteries.

I’m not going to make an easy jump from that story to Berea church and what we’re about here today.  Sure, you could tell a similar story about how, as we come here to remember all the ancestors who have preceded us in this place through the years, we are becoming connected to what has gone before and how we learned to become who we are through what happened here.  All of that is true.

But when the people of God remember, it should also be in anticipation of what God is doing next.  Because it’s all bound up in a story that began a long time before we got here and that story includes a remarkable promise that all of history takes place within God’s intentions and it’s not over until it’s over.  We say this whenever we get to that part in the Eucharist that we call the mystery of faith – Christ has died, Christ is risen, Christ will come again.  This is what it’s all about.

The Isaiah passage this morning is one we have been using within the Annual Conference as a theme verse this year.  It sounds a little scandalous to bring into this service when we’re doing so much remembering.  Maybe it’s in bad taste even.  “Don’t remember the prior things,” Isaiah 43:18 says.  “Don’t ponder ancient history.  Look!  I’m doing a new thing; now it sprouts up; don’t you recognize it?”

Well, no, God.  It’s kind of hard to see a new thing right now.  As we read Kirk Mariner’s history of Berea Church, we feel a great sense of loss.  Our 1880s ancestors carved a place out of the wilderness—the hardwood trees that lined the road between the old post office and the new railroad.

They were the ones who saw the new thing that was happening in old New Church.

They were the ones who placed this building here that represented confidence in God’s presence at the center of the community.

They were the ones who held camp meetings on the back lawn and expanded the building and placed this stained glass in the windows.  John & Esther Brittingham, Hester Covington, Rev. G.H. Stockdale—they saw the community and the church grow.  They saw the new thing.

We?  We wonder, in our darker moments, if God still has a place in the old town.  We see our children, our grandchildren, leaving town or not leaving town, but certainly leaving church.  We know the church doesn’t have the central place it once did in the community.  People pass it by without a thought.  Going out, going home – living lives that are too often defined by what they lack – not enough work, not enough income, not enough time, not enough confidence, not enough skills, not enough education, not enough self-control, not enough love…not enough.

Kirk Mariner’s history is helpful here.  You know he had a kind of maudlin mood at times and it shows up in his history of Berea that he wrote in 1974.  He outlines the traditional measures of successful churches – a quaint, lovely structure, endurance through many years, crowded Bible classes and giving to missions.  “By any of these yardsticks,” he says, “Berea Church has never been much.”  He wouldn’t even credit the fact that it had nurtured him in childhood as a sign of great success.

But Kirk found some comfort in the way the church accompanied the town in its history.  “Nothing will redound quite so much to its credit as our being able to say, ‘Berea and New Church lived every moment of their lives together.’”

I can’t read that without thinking that, with Kirk’s death just a few short weeks ago, he wasn’t just talking about this town which he identified with so much, but himself.  Berea and Kirk lived every moment of their lives together.  My last conversation with Kirk took place just a week before his death and we were talking about this service.  He was planning to take part in it, but he wasn’t happy about it.  He spent the whole conversation with me rearranging the coasters on the coffee table between us, trying not to think about this day.

But he knew the virtue of what this church, what this congregation, what you have done.  You accompanied this town into its future and held out a promise.  The word was proclaimed from this pulpit.  Lives were touched by your ministry.  You were all any of us can be—open to God’s using what we have.  In that sense, you were…you are…enough.

The reason Isaiah tells the exiled people of God, “Don’t remember,” is not because there is no virtue in looking back, but because God is not through with them yet and God will do even more in what’s to come.  The parting of the Red Sea—-that’s going to be nothing compared to what God will yet do.

I’ve been reading a book of poems about old churches.  It’s called Building Jerusalem: Elegies on Parish Churches.  Every morning I read a poem and every morning I get mad.  Because most of the poems are by people who have no idea what they’re looking at.  Most of the poets are people who have become disconnected from the church or who are longing for a connection to God and haven’t found it yet.

I don’t fault them for that.  But when they come to these old churches and the cemeteries that surround them, most of them only see stories that have ended.  One poet walks through a ruined abbey and he says:

“And now the wind rushes through grassy aisles,

And over the massy columns the sky arches.”

Well, sure, the wind rushes through old buildings and grass grows in ruined aisles.  That’s what happens to human artifacts.  They all suffer the effects of time and the elements.  We can look around New Church, around the Eastern Shore, and see what time will do.  We know what it does to us, too.

What I long for in the poems is some recognition that the stories begun in old places are not over.  We carry them in us.  They are embodied in us.  What happened in this sanctuary as we shared a hymnal with a spouse,

and a child got restless,

and Luther snoozed during the sermon,

and Mary wept quietly during the prayers,

and the piano got out of tune and we wondered when we’d get the tuner in,

and the preacher told a tale and we felt it strike a nerve,

and she placed a hand in the font to bring water to a grandchild’s head,

and he broke the bread and stumbled over the words of the Great Thanksgiving…again,

and the light streamed through the window and we marveled at the color,

and the wind howled against the roof and we wondered if it would survive one more storm,

God has a habit of taking people who thought that were at the end of their journeys and giving them one more surprise.  It happened for Abraham and Sarah, who in old age, had one more great trip in them.

It happened for old Eli, whose life as a failed priest in a land where the voice of the Lord was rare, was surprised by the boy Samuel who could hear God whispering in his ear.

It happened for Simeon and Anna, two old prophets who hung out at temple in Jerusalem…waiting.  Waiting.  Fasting.  Praying.  So long.  So long.

Then a couple brought a child for the traditional presentation in the temple, as couples did every day.  It was an ordinary moment.  But Simeon went to the young couple and asked to hold the child.  So long.  But he believed that he would not die until he had seen the Messiah.

He holds the child and looks at him.  He looks to God and says, “Now, let your servant depart in peace.  Because my eyes have seen your salvation.  I can go now because I know that You are trustworthy and You keep your promises.”

Anna is right down the way and she’s been waiting too.  So long.  So long.  And she joins in the praise and she says, “I have seen what God can do.  I know what God will do.”

Now, let your servants depart in peace.  Because our eyes have seen your salvation.  We know that You are trustworthy and that You keep your promises.

But pray a prayer of thanksgiving for the ways this place has blessed you and told you who you are and reminded you of God’s continuing grace.  You are now the legacy of Berea Church for the world.

The thing is, that I never thought I could hang with my dad.  He seemed beyond me when I was young.  But when I came back from those trips trudging through cemeteries for family history, I knew I didn’t have to be anything other than I was to have a place.  I was in.  I was part of that story.  And wherever I am, what happened on those trips goes with me.

You are in.  You can tell the tale.  God is enough – yesterday, today, and tomorrow.  Thanks be to God.