The bright lights and hubbub of the big city (Archer City, that is – population ~1800) were starting to get to me, so I decided to head even further out into West Texas.  Out to where the skies stretch out like God’s own Imax screen.  Out to where coyotes howl at the setting sun and the rising moon.  Where javelinas, those tough little pigs, take chunks out of prickly pears and diamondbacks thick as a tree trunk slither across the roadway in the heat.  Out to Big Bend country.

Who am I kidding?  All those things happen in Archer City, too, but you need to savor the differences.  Texas has more layers than a sweet Vidalia, though you wouldn’t know it from the coverage it gets, pro and con.  And if Jerry Jeff Walker found a piece of Texas essence in the Chisos Mountains, maybe I could, too.  Viva Terlingua, y’all! 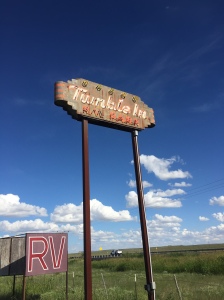 I set up camp at the Tumble In RV Park just outside of Marfa where, I kid you not, a major poetry festival was going on.  I wandered over to the El Cosmico Campground  and we sat by the light of the setting sun among the yurts and teepees, listening to poets from exotic places like Tucson and New Jersey wax about border crossings, Wall Street, and childhood trauma.  We laughed.  We cried.  (On the inside.  We are poets after all.)  A band set up to play some desert folk.    It was like what Woodstock would have been if people had brought vegetables to grill and had really good footwear from REI.

I didn’t survive at the Poetry Festival past the first night.  Marfa, I realized, was not for me.  Every gas station has become an art gallery and every quonset hut an organic burrito joint.  I needed something that involved more existential wondering, more sense of place, and more sweat and misery.  Poetry can do that when its good, but not in fru-fru Marfa.  So after a hearty breakfast at Buns N’ Roses, (it’s a flower shop after breakfast, OK?), I headed for the Chihuahuan desert. 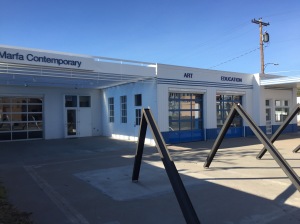 Roadrunners darted across the road as I wound down the mountains south of Alpine.  A coyote slipped under a barbed wire fence and disappeared into the scrub.  The landscape turned from a fragile, vibrant green to yellow dirt and gravel.  Strange, volcanic mountains off in the distance and not a house in sight.  Eighty miles to Terlingua, and nothing in between.  And Terlingua was supposed to be a ghost town.

Only it’s not.  The cinnabar mine from which the military extracted so much mercury to blow up things in the World Wars, has closed.  But the end of the mercury trade has not meant the end of the crazy in Terlingua.  Jerry Jeff put it on the map with his iconic 70s album, but competing international chili cook-offs and an earned reputation for offering refuge to misfits have made it a collection point for a wide variety of eccentrics.  I stopped at La Posada Milagro for a coffee.  “Espresso…y poco mas!” the sign said.  Very little mas as it turned out.  But, hey, I was not expecting coffee in the desert.

I sat on the patio and looked out towards the valley and the Chisos beyond.  A small cemetery filled with bleached wooden crosses marked the final resting place of former Terlingua residents who had braved this unforgiving terrain, coffee-less, in years past.  The heat made it feel as though everything beneath it was grilling – not just the vegetables back in Marfa.  I couldn’t imagine thinking clearly in such heat in the days before air conditioning, never mind that they were, you know, mining mercury!

Big Bend offers two spectacular parks, the national park—which fills with visitors during its peak season March-June to hike the Chisos basin, ride the rapids through Santa Elena Canyon, and perhaps to sit in the natural hot springs baths and watch the sun set over the Rio Grande, and the state park—which offers unrelenting desolation, no services, but the greatest drive in America.  That’s where I was headed.

I stopped in the visitor’s center in Lajitas to check in with the ranger about what I should know about hiking.  Turns out what I should know about hiking is that I really shouldn’t do much of it.  It was 100 degrees, you are absolutely exposed to the sun, and everything out there, plant and animal, wants to hurt you.  Or even if it doesn’t, it will do it incidentally.  That in mind, I headed to the Fresno Divide Trail, a pleasant little jaunt just south of El Solitario, the major geologic feature of the state park, which is a massive eroded volcanic cone.

Forty-five minutes into my hike, I had found what I came for – the splendid isolation of the desert, the remarkable flora and fauna perfectly adapted to their environment, the absence of pretentious poets.  To be in such a place was lonesome communion with the Creator and creatures.  My inner space expanding in this big space.

Then it thundered.  Black clouds began rolling up from the Mexican side of the river and to the north over El Solitario.  Two storms were coming and I knew, because I watched my fair share of Westerns, that a feller could drown in the desert if he got stuck in an arroyo in a rainstorm.  Not that I was in an arroyo, but I liked the word so much that I repeated it out loud on my jog back to the car, racing the clouds.  Arroyo.  Arroyo.  And to be fair, Fresno Canyon was just to my right. 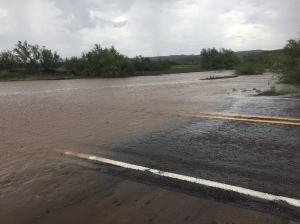 The rains did come.  After driving a while along the Rio Grande, I found myself stranded between two improvised rivers on the road to Presidio (aka The Greatest Drive in America) and had to wait for the waters to go down.  I stood by one of those rivers with the surprisingly refreshing smell of the damp creosote bushes in the air.

The rest of the day was not so pleasant.  The rains returned when I got to the Tumble In and I had to retrieve the tent from a lake and pack it wet.  I ended up at the Bien Venido Motel in Alpine about which the less said the better.

But if I can’t recommend the accommodation, I can encourage you to take to the desert.  The Bible says that hope comes like streams in the desert and I’ve seen those streams.  They flow through ocotillo and lechuguilla down to the canyons of the Rio Grande.  I hope we never see a wall in such places.  The glory of God needs to flow.

Oh, but I gotta tell you about Cowboy Church!  Next time…