The Consolations of the Curveball – A Review of Off Speed

The season is over.  The World Series is receding to a mischievous gleam in Jose Altuve’s eyes.   Carlos Correa proposed to his girlfriend on the field as the confetti was still falling.  Verlander married Kate Upton.  It’s time to wish them well and sit by the hot stove and set baseball aside until pitchers and catchers report in February.

Winter is the season when baseball becomes poetry, when the season is distilled to its sparkling essence and entered into the rich vocabulary of memory.  Now the players, no matter the record of their team, become characters in our inner story.  Sure, we shuffle them between teams and positions in our minds, but they also populate our most basic narratives about ourselves like personified virtues in a medieval morality play.  Ichiro is Persistence. Big Papi is Power.  Felix Hernandez is Craftiness.  We need them all. 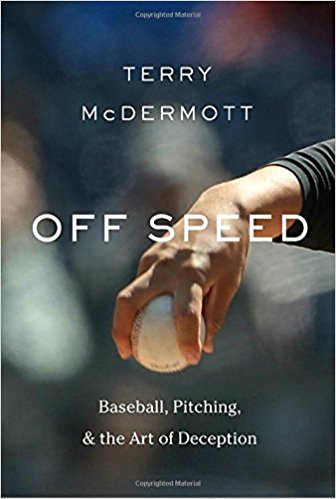 Terry McDermott gets it.  In his book, Off Speed: Baseball, Pitching, and the Art of Deception, he serves up King Felix’s 2012 perfect game over the Tampa Bay Rays with delicious detail.  Each chapter analyzes a pitch and an inning of the game so that you not only get the skinny on sliders, sinkers, curves, and knuckleballs.  You also get the drama of that rare thing – a day when a pitcher is truly unhittable and a stadium full of fans rises up to give witness to transcendence in our midst.

There’s a little too much of Terry’s reminiscing in these pages, but you forgive him the indulgences.  After all, there’s not a lot of glory in Seattle Mariners history to pad out this highest of high moments for the franchise.  What he gives you is enough information to understand what’s going on and enough poetry to remind you why baseball will always be America’s Pastime long after the violent, chaotic NFL sideshow packs up and rolls on.

McDermott offers some really interesting history of the game.  For instance, it was originally intended that pitchers would throw the ball so that it could be hit – underhanded and as slow as possible.  Speed changed the game, first through the development of the fast ball and then through a grab bag of off speed pitches designed to fool the hitter.  The history of deception is fascinating.

Just as interesting is how McDermott’s choice to focus on the off speed pitching of Hernandez foreshadowed the Year of the Changeup we have just seen.  The heater fever, which values melting the radar gun, seems to be breaking and the more successful pitchers are finding ways to get more strikes with less speed.

Speed differential is the name of the game.  It’s why my own Texas Rangers found some moderate success with a closer, Alex Claudio, whose arm speed tops out at 86 miles per hour — well below average.  In a league where hitters expect a blazing fastball, he kept them frustrated with off speed pitches in the 70s, only occasionally throwing his slow-lane heat.

So for a preview of what pitching will look like next year, I recommend Off Speed for your winter reading.  You’ll know what to look for when Opening Day comes around on March 29 (Maundy Thursday on the liturgical calendar).  And McDermott will give you some philosophy along the way, as he does in his closing reverie:

We deceive ourselves when we think leaving things behind has no cost. It took me years to realize what I had given up in exchange. Belief, belonging, humility, and family were among the things I lost; I have yet to recover any of them completely. Yet baseball remains and provides a faint trail back to that past while my life tumbles on. Baseball offers an invitation, of a sort, to return. (173)

My prediction for World Series champs in 2018 — the Texas Rangers winning with an Alex Claudio changeup in Game 7.  But then again, that’s how I thought 2017 would end.