Cormac McCarthy doesn’t need any more accolades from the likes of me.  His reputation as a great American writer seems pretty secure.  But as a recent convert to the ranks of his fans, I have to say of The Crossing – wow.

That’s probably sufficient.  I’m not going to be an equal to his prose and the writer in me just wants to lay down the pen and acknowledge the master.  But perhaps just a few more words.

The Crossing is the middle volume in McCarthy’s Border Trilogy.  Throughout I was wondering what direct connection there was between this book and its predecessor, All the Pretty Horses.  The indirect connections are certainly there.  ATPH has a pair of teenaged protagonists in mid-20th century America discovering the world and themselves in cross-border expeditions with horses into northern Mexico.  The Crossing has the same, and you might be tempted to think that McCarthy is just writing the same book twice.

But the storylines don’t intersect, (though I understand that Billy Parham, the main protagonist in The Crossing, will meet up with John Grady Cole from the first book in Cities of the Plain).  And if there was high-spirited adventure and romance in ATPH, there is much more bleakness and scattered pieces of a narrative in The Crossing. 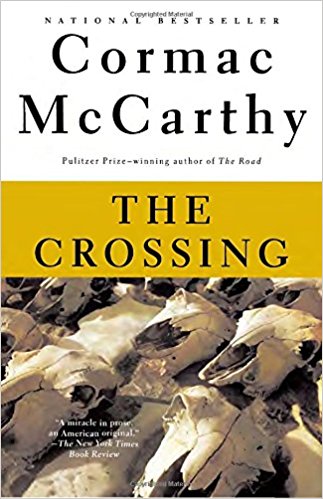 You can see some old ancestors in The Crossing—Don Quixote, The Odyssey, Flannery O’Conner, Faulkner—but what McCarthy does with them is absolutely unique to him.  There is a pregnant wolf who makes the first crossing from Mexico into New Mexico and becomes the focus of Billy Parham’s unexplained quest to return her to the mountains from which she has come.  There is Billy’s long sojourn in those mountains following the violent end of that quest in which he is immersed into a Mexico still scarred by the terrors of the Revolution, now some two decades in the past.

There is Billy’s return to New Mexico to discover his parents slaughtered and the family horses stolen.  Billy’s reunion with his brother Boyd and their journey back to Mexico to try and retrieve what has been lost.  A 14-year-old girl who becomes an unlikely companion.  Adventures with ruthless horse thieves.  A grievous injury.  Encounters with a blind veteran and a circus diva.  And in the end Billy is left on his own to return back home.

After failed attempts to enlist as World War II is beginning, Billy knocks around ranches picking up jobs before making one last crossing.  This time, his brother and the girl have entered the realm of legend.  Billy digs up Boyd from a desolate grave and carries his bones back to the States, but not without one more encounter with deadly thieves and one more metaphysical conversation with gypsies carting around an airplane fuselage.

What this summary doesn’t capture is the beauty of McCarthy’s writing and his supernatural gift with description.  You will get lost in the particulars, but you will know the terrain with intimacy.  And it is that deeper knowing that this trilogy keeps pointing to.  To know in a place the story of earth, heaven, and humanity itself.