“I look around my church and all I see are ghosts.”  It was time for a pastoral change and I was meeting with the Pastor-Parish Relations Committee in my role as the District Superintendent, preparing the church and myself as we looked toward the appointment of a new pastor.  The woman speaking was a longtime member and she was having a hard time being hopeful about the future.  Too many good memories in the past.  Too many people she had known lost to death and moves.  Too many ghosts.

The small churches of Calhoun and Drake’s Chapel in rural Missouri were feeling haunted, too, when their District Superintendent (DS) asked a lay speaker named Margie Briggs to step in for a time.  The beloved pastor of the church, facing who knows what demons in his own life, had committed suicide at his home on a Sunday morning.  Margie stepped in for a few months to serve the two small churches, whose average combined worship attendance was about 14.

When another local pastor was assigned, he served a few months but then left under a cloud after absconding with the Salvation Army kettle and a consequent visit from the local police.  The DS called Margie again.  “Can you just get them through until Christmas?” he asked.  Over ten years later, she’s still there. 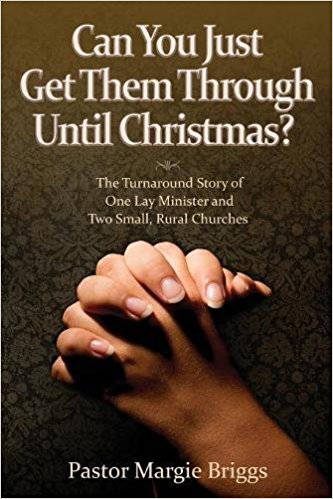 Given the sad history of her predecessors and the sparse numbers in the pews, the revival of these two rural churches under Margie’s leadership seems miraculous.  But as Briggs describes it in her new book, Can You Just Get Them Through Until Christmas?: The Turnaround Story of One Lay Minister and Two Small, Rural Churches [Cass Community Publishing House, 2017], the building blocks to recovery were simple and fairly traditional—an openness to God, outreach to the needs of the community, and leadership that was determined “to greet new and different people.”(x)

Lay ministers like Margie Briggs have always been a part of the Methodist leadership pool, but they are taking on a growing role in rural areas where churches are struggling to support credentialed clergy.  Many of them are part-time and bi-vocational, but most are extremely dedicated to the churches they serve, offering them a chance to create new chapters in ministry.  Some lay ministers are seeing growth and new relevance for congregations that thought their best times were in the past.

“Small churches don’t need to create a system of small groups to help people fit in,” Briggs says in her introduction, “they are natural places of intimacy.”(x)  They can use this natural gift to make a difference in their communities in making disciples.

Over the course of 23 short chapters, Briggs tells episodes in the story of the Calhoun & Drake’s Chapel turnaround.  She describes physical improvements to make the church spaces lighter and more welcoming.  But the churches not only upgraded the inside of the church, they moved outside for ice cream socials in the parking lot and put floats in the Calhoun Colt Show parade.  When they planned a one-day Vacation Bible School and only one child showed up, they jumped in the car, drove around the neighborhood, and collected children.  They exchanged youth mission teams with a church in downtown Detroit, did luncheons for public school teachers, and began a prison outreach ministry.

“It is so easy to be consumed by what a small-membership church cannot do,” Briggs says (75).  But she describes how each of these ministries began with a small, manageable step and grew on the enthusiasm and compassion of those who participated.  It also helped that Briggs herself seems to have a contagious spirit and a commitment to excellence.

“Unless we are going to give up on every town or village across the country with under 2,500 people,” Bishop Robert Farr says in an epilogue to the book, “we need to figure out how to create, encourage and renew compelling and competent small churches, engaged in ministry that is dedicated to reaching new people and doing whatever it takes.” (100)  He notes two key components in this renewal—lay leaders “who are in love with Jesus, people and their mission field” and a willingness on the part of the congregation to change. (100)

Briggs encouraging book, (which includes a study guide), makes the daunting task of helping small, rural churches thrive seem possible and even, dare I say, fun.  At the very least she makes it clear that we don’t have to live with the ghosts of what’s gone before.  We can trust that God will do a new thing even in old places.