Think the racial narratives of American political discourse are bad today?  As Edward Ayers reveals in his latest book, The Thin Light of Freedom: The Civil War and Emancipation in the Heart of America, it’s nothing new and it’s been worse.  In the second part of my interview with my former professor, we talk about racial narratives of the mid-War North and the post-War South.

The first part of my interview can be found by clicking this link.

So, then, how new was the racial narrative that the Northern Democrats developed during the Civil War? How did it work for them and was it really new or was that of a piece with what went before?

Once they’re fighting to the death against white Southerners, they don’t have that option anymore and it becomes just anti-black. So, in some ways the racism is of a purer form in the War. You see this in the invention of miscegenation as a scare tactic of the Democrats.

During the war itself, the Republicans are always pointing out, “You guys are just on the verge of treason—wishing ill for the Federal armies, kind of pulling for the Confederacy a little bit because you don’t want to see slavery end, because you don’t really want the formerly enslaved people to come into the North.”

The Democrats don’t really have a good answer for that because that’s kind of true. Then after the War, they return to their sympathy for the white South and in some ways the War is an interruption of the longer conversation about race. The difference is that there are white Northerners after the War, who didn’t exist before, who had their entire political identity wrapped around some kind of justice and freedom for the formerly enslaved people

That’s one thing I really emphasize—here’s a case where politics does something great. You have all the mobilization on the ground of people who want to be elected and re-elected, and to do so they embrace emancipation. And because they embrace emancipation, they embrace the character and capacities of African-Americans. If you don’t have that, you don’t really have the mobilization of white support in the North for Reconstruction. We’re so used to thinking of politics as a corrosive craft, but here’s a case where politics played a role that no other institution could have played because it blended self-interests and idealism in a really powerful mixture.

Everybody was happy that Andrew Johnson was president after Lincoln’s assassination. The Democrats say, “OK, we got one of ours. Even though he just ran on the Union ticket, he’s always been a Democrat.”

The Republicans say, “Here’s the bravest guy in the South who was uniquely willing to stand up for the Union against his own people.”

Johnson was trying to make a national Republican Party that could hold its own with a national Democratic Party that was reassembling itself after the War. The white Southerners and the Northern Democrats came back together quickly despite the fact they had just been killing each other months before.

So, I give Johnson a little more credit than most people. I’d say, “What was he doing?” It’s true, he threw black people under the bus. It’s true that he granted pardons to so many former Confederates. But why?

It’s usually explained, “Well, he was a racist.” Well, yeah, but so was everybody. The difference was, he was doing what he thought Lincoln wanted to do, which is to put together a national party, North and South, of white people who would further the cause of union. To do that he was willing to sacrifice much that had been won recently and at such great cost.

Even though there was a war and I know those were extraordinary circumstances, it’s surprising that the Republican Party was able to retain control of Congress as long as it did. I don’t think of Congress as really having that much time to do much and, in our day, doing much of anything at all. How unusual was that?

That’s a really good point. If we pull the camera back a little bit, though, we see that they were racing. They accomplished as much as they did because they knew it wasn’t going to last. So, you have the nine months that Johnson was president that Congress is not in session. Then he basically sacrifices a lot of what the Republicans believed in and what a lot of Northerners believed in.

But because of the disgust of what white Southerners did in that time, they were able to win a mandate in 1866 that they were able then to carry over into 1867 and ’68. But they started losing as soon as they started winning. The Democrats started a resurgence almost as soon as the Republicans were in power creating the Military Reconstruction Act.

My experience is that people don’t even think they understand Reconstruction because it doesn’t have any kind of a narrative arc. It starts ending as soon as it begins and it ends in different states at different times in different ways.

I asked my freshmen students last year to tell me about Reconstruction. I said, “Go online and see what people think about Reconstruction.” They came back and the only commonality was that it was a failure. That’s what we teach our children—Reconstruction was a failure. I think that’s misleading and also defeatist. It also undercuts the idea that the government might be able to do something important. Of course, it’s going to end. You can’t change people. So the point is that the Republicans were racing precisely because they knew that if they didn’t do it then they might never do it.

Another great thing about the book is the way that you captured voices from people who were in the US Colored Troops during the War. I have always known how important those soldiers were symbolically, but what came through in the book was, practically, the North really relied on what the Colored Troops were able to do in the field.

Yeah. The New York Times wrote an article about the Valley of the Shadow project back in 1999 or 2000 when the idea of an online project was considered a novel idea. An older professor wrote me and said, “You would never find them, but the largest single collection of letters of African-American soldiers is of a family from Franklin County [PA]. But they’re filed in the county next door… I can’t read the letters.” 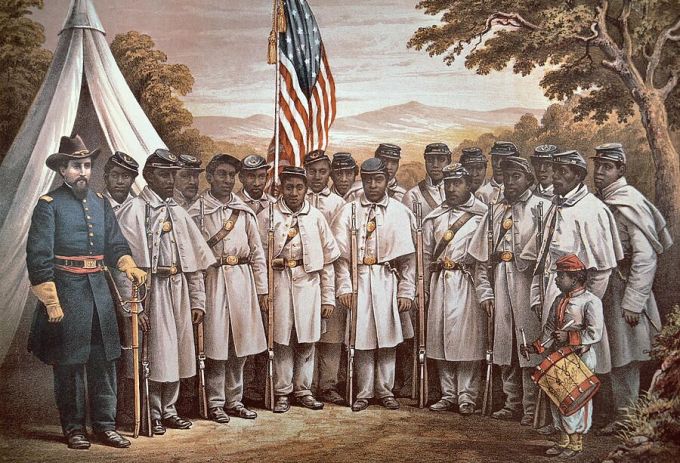 I wrote back and said, “That’s ok. I know some twenty-two-year-old eyes that can.” And [the grad students] transcribed all those letters. So, I was able to flesh out that story because of that remarkable stroke of good luck.

The fact that these guys were just writing to each other…they’re not grandstanding. This is not a speech. This is not an editorial in a newspaper. They’re just saying, “I do believe it’s God’s will that this War will go on till the black people have their rights.”

I still get chills thinking about that and for us to know that that’s what they were fighting for. I think is crucial. It changes the story we have. Denzel Washington, Morgan Freeman [in the movie Glory]—it’s all great, but it gives the impression that it ended after Fort Wagner [in 1863]. As you see, it didn’t and the kind of fighting they were doing on up to the gates of Richmond is an important thing for us to know.

Click on this link for Segment 3, “Musicals, Monuments, and Historical Optimism.”