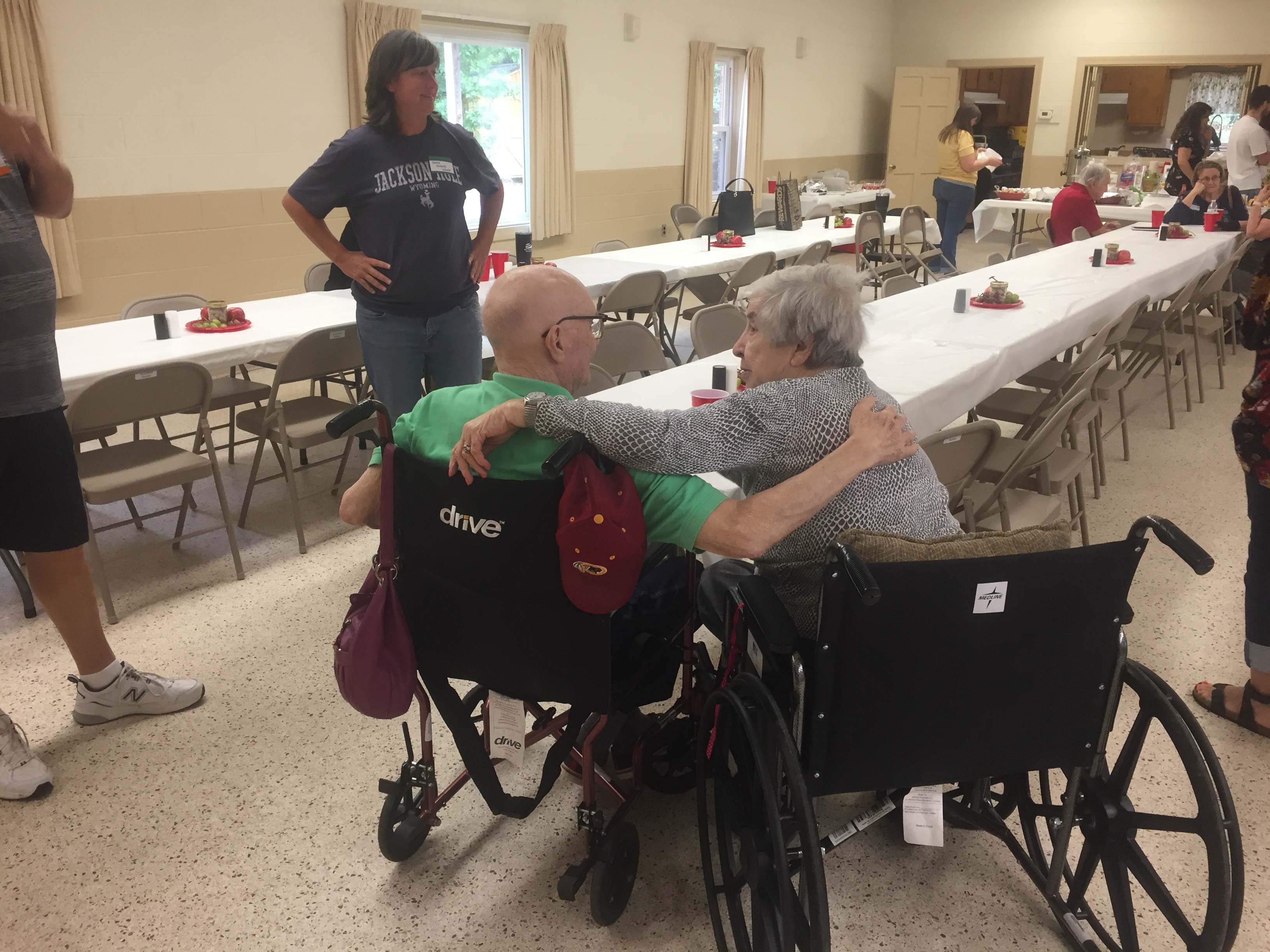 On November 8, 2019 we celebrated the life of Commander Bess Bryant Sheldon, most everybody’s Aunt Bess. These were my remarks at the service:

So let me start by acknowledging that you don’t get to be a pastor to your own family. People know you too well. You might get called upon to do the prayer at the family reunion, but people still remember when you were a kid running around the Ruritan building in Courtland or Walters. They call you by your dad’s name sometimes. I’m not going to pretend that this is anybody other than my Aunt Bess, our Aunt Bess, here, or that I’m anyone other than the boy who spent weeks in the summertime at the rock house in Pennsylvania with her and Uncle Jack. That will help me be real, too.

And getting real, Aunt Bess was a handful. Uncle Jack may have been the bigger of the two, but she was outsized in almost every way. She lived a big life—she laughed a lot, she traveled a lot, she organized a lot, she took us in a lot, she expressed her beliefs on any number of issues of the day a lot, she smoked a lot, she loved a LOT. She was ‘extra,’ as the kids say these days. But, man, she touched a lot of lives and she made a difference in the world.

Before she became the aunt who grabbed you close and pulled you in to give you a hug while she cried tears of joy just to see you, she was one of the most decorated women in the US Navy. A trailblazer, as Nancy put it. Commissioned as an officer in 1952. Had duty stations in Norfolk; New Jersey; Philadelphia; Carlisle, Pennsylvania; and Washington, DC. Director of the Woman’s Officer Training School in Newport, Rhode Island, where there is a plaque now with her name on it. Awarded the Navy’s Commendation Medal and the Distinguished Service Medal. Retired in 1972 with the rank of Commander. That was Commander Bess Sheldon who was hugging on your neck and telling you she loved you.

Before that she was an English teacher at Norview High School in Norfolk. And OK, she wasn’t a great English teacher. As Nancy put it: “Teaching, however, was NOT her calling. It meant that she had to get up too early, had to grade papers, and couldn’t fail students who didn’t do their work! Her homeroom students were seniors, and Peanut (one of her favorite students), would often take roll for her when Aunt Bess was late to school!” She lasted one year.

But before that she was a student at Madison College, JMU, as we know it now. Editor-in-Chief of The Breeze, the college newspaper, her senior year. Listed in Who’s Who in American Colleges and Universities. A member of Alpha Sigma Alpha sorority where she made life-long friends who enjoyed getting together for many years after college. She was always proud of having been a graduate of Madison.

Before that she was valedictorian of Courtland High School, class of 1947.

And before that…well, what happened before that shaped her for the rest of her life. When my dad, Pete Joyner, tells stories about growing up in the Depression in Southampton County there are two things that always come through in his stories—it was incredibly hard, and his family, particularly the Bryant side of his family, got them through. My dad is only two years younger than Bess, even though she was his aunt, too. In many ways they grew up more like cousins or siblings. So they traveled that time together.

My dad has always told a story about the day he was born in 1932. He was born in the back of a country store at the intersection of Cypress Bridge Road and Rt. 58. He says that after his mother, the first person he saw was this cute little girl, aged 2 1/2, standing beside the bassinet in the back room of that store. He then says that he jumped up and ran to the front of the store where he bought a Baby Ruth and an RC Cola, which seems a little far-fetched because…where’d he get that money?

But I realize that he’s probably got memories of that day because Bess had memories of that day. She told him about it. And they made a lot more memories over the years. When the families were living in the house, the kids had to share a bed—my dad and his brothers sleeping at the foot of the bed while Bess and the other children slept at the top. They would go down to the Nottoway River and go up and down the river on Pop’s boat, which he never kept locked up. Before Christmas, they had a tradition of going down the river and shooting the mistletoe out of the trees with a 12-gauge. Sometimes it was Bess behind the shotgun. The mistletoe would fall in the river and they’d take it back to the house to decorate.

Bess would sometimes tell me stories of how the family survived the hard times, sending family members out to the shipyards to work, taking in my Dad’s family when they lost their home, traveling to take care of sick relatives.

It’s kind of remarkable that our family – our extended family – still gets together like we do. That Bryant-Kitchen Reunion that gets 80 people together every October is a rare and beautiful thing in this world. But part of the reason it is what it is, and part of the reason we are what we are, is because of what happened in the Depression. Bess never forgot the importance of having enough and the importance of family. She also never forgot the tragedies and slights either. But she always held on to family.

And when she finally met the love of her life, Jack Sheldon, and they married on October 19, 1963, they created their own little family. They never had children of their own. It was a decision they made to allow Bess to continue her trailblazing career. But they had children. They were always trying to kidnap us to take us back to Dillsburg and Arlington before that. Nancy, Randi, & Janice got their regular visits. They both loved children and I know many of you spent time with them. In all the years they spent in campgrounds and RV parks in their later years, they were always collecting children. And the Redslob children who lived up the hill in Dillsburg were as much family for them as any natural children could have been.

We alternated years going to Dillsburg for Thanksgiving or having them come to Orange. Nancy remembers how the farm was “the gathering place for their friends at their annual New Year’s Eve party, not always held on January 1; some years it was held as late as February. Didn’t matter; they still had the party!”

Nancy says, “In 1975, Bess and Jack traveled to Alaska and fell in love with the state. Uncle Jack always said, ‘Everything is bigger in Alaska, even the bugs!’ In 1987, they and a group of friends purchased an RV park in Ninilchik, Alaska, and Bess and Jack served as managing partners. In 1994, they built a home on the Kenai River and spent summers there; Aunt Bess continued to live in the ‘Fishing Cabin’ as she called it every summer even after Uncle Jack’s death, until she was no longer able to make the trip.” Some of you might have had the pleasure of visiting them there and staying in the small trailer they kept for visitors.

But Bess finally came back to Virginia because she wanted to be close to family. She didn’t have an easy time and she was prone to depression. Something we shared. Another family trait. But she was here because she loved us and she told us.

And she got good care. I’m going to leave out some folks if I start naming them, but I know Johnny Bryant and Randi and Frankie — you were always doing stuff for her. And Nancy, there aren’t words enough to tell all that you did for her in these last years. You gave above and beyond and through some really tough transitions. On behalf of all of us who were watching from afar, thank you.

I’m not your pastor. But I do know that Aunt Bess had a strong faith. She had a hard time finding preachers she liked. I think I only made the grade because I was family. But that didn’t change her love for God or her trust that her story was eventually going to fold into God’s story. She wanted the same for those she loved. And her faith made its way into the way she cared for others.

My dad’s got that same kind of trust. He said this to me last night: “He said to say to you—I was sorry that I wasn’t able to come to the service today, but I’ll probably see Bess before most of y’all will. And it’s typical of how she treated me all of her life—she always looked out for me. And that’s what she’s gone to do now—to prepare the way for me. So that when I get to the other side of the river she’ll be there to take care of me.”

It’s kind of a sentimental way to look at heaven maybe. But scratch the surface of most of us and you’ll find that what we really hope for in death is to be surrounded by those we love. It’s what I hope for. Heck, it’s what I count on.

But it’s more than that. Because the people that love us tell us who we are and they tell us that there are things that survive even death. And the glimpses of beauty that we get in this life through them are the hints of a God-kissed world, reflecting a greater Love. Even Jesus—at the tomb of his friend, Lazarus, and knowing he would pull him out of that tomb—even Jesus wept. Because he saw the pain and the beauty of love in this world. He saw the pain and the beauty of Mary and Martha, the sisters, weeping because of that love.

I don’t want to miss it. I want to be wide awake to all those moments, because they pass so quickly. The writer Annie Dillard in her book Pilgrim at Tinker Creek talks about learning how to pay attention. “No, I’ve gone through this a million times, beauty is not a hoax—how many days have I learned not to stare at the back of my hand when I could look out at the creek?  Come on, I say to the creek, surprise me; and it does with each new drop.  Beauty is real.  I would never deny it; the appalling thing is that I forget it.”

“Spend the afternoon,” she says, “You can’t take it with you…The universe was not made in jest but in solemn, incomprehensible earnest.  By a power that is unfathomably secret, and holy, and fleet.  There is nothing to be done about it, but ignore it, or see.”

Didn’t we have some moments of beauty with Bess? Wasn’t she a leader, a trailblazer, a handful, a treasure? Does that beauty ever really go away?

One response to “In Memoriam: Bess Sheldon”