Michael Mergen is a photographer of memory and landscape.  His photos capture ordinary, even shabby parts of America and invest them with the meanings we place on them.  So a series on the things businesses give as freebies to veterans (burgers, ice cream) and another on the things we name for war heroes (interstate highway bridges, stretches of commercial streets) becomes a silent commentary on our values.

At a recent exhibition at the Longwood Center for the Visual Arts, I was particularly taken with a series that imposes the image of highway historical signs over the contemporary landscapes of Virginia Civil War battlefields.  So I gave Michael a call and the Farmville, Virginia-based photographer and professor at Longwood University gave me some time to talk about his work.

Can you tell me just a little bit about how you see your work?  How would you describe what you do?

So, the landscape you’re working in right now, [Southside Virginia], obviously influenced some of your projects, like the Civil War series.  Is there one region that was kind of formative for you? 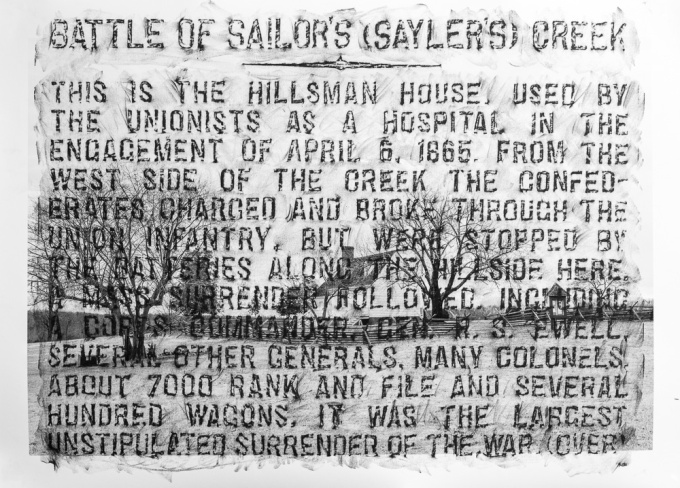 I grew up just outside of Philadelphia and Pennsylvania and that’s still home.  That’s where my family is…So, that landscape was home.  I’d always been a student of American history and enjoyed that history, but never really was taken by the Civil War and never thought of that as more than just a part of the long, complicated American history.

Then, I moved to Virginia and it took quite a few years of being here to let some of that influence creep into the work.

This is obviously this pivotal event in American history.  About half of it was actually fought here; and then, living in Farmville is like you’re living on Lee’s Retreat [in 1865 from Richmond].  So, I’ve seen some of the historical signs just doing other projects.  I’ve see the signs driving around rural Oklahoma.  Even in California and other places.

It was one of those things I kind of saw out of the corner of  my eye–I was probably doing 60 miles an hour down some back road, and thought that the physical marking of a landscape was denoting some kind of historical significance to it.  But then, so often what is being described there is absent from the landscape.  Occasionally there’s a house, [but] usually it’s more of an oblique, invisible reference. So, with the signs, it’s one of those deep, backburner kind of ideas. With the Civil War sesquicentennial, the 150th anniversary, I was thinking about the war.  I don’t have a connection to it, per se, but living in Virginia gave me, in some ways, permission point to it.

So, doing the signs, the rubbings, was fitted to my interest in landscape and the interest in history.

Yeah, so, I would photograph where the sign was and put myself within a reasonable distance.  I didn’t have too many set rules.  I started photographing where the sign was–sometimes, literally right next to the sign.  Sometimes, it might be 100 feet down the road a little bit, or off the shoulder of the highway.

Then, I’d make a print back here at school that happened to be roughly the same size as that sign, and then take the print back to the sign and clamp it on using spring clamps.  I’d do a crayon rubbing. I ended up using these jumbo, black crayons from Crayola.  I’d go into Wal-mart and buy these 8 packs.    My daughter would be like, “Dad, where are all the black crayons?”  She was left with 7 jumbo ones but all the black ones were used up.

I’d do this rubbing over the print because I was interested in this collision of history and contemporary landscape, to get at the idea that these signs are speaking or pointing to something that is gone.  We’re saying a hundred years ago this army passed through here, or, half a mile from here, a big battle happened, but there’s no trace of it.  There’s nothing.  So, I’m interested in the visual disparity of that.

In some of the ones where the landscape feels more contemporary, the ones that are closer to Petersburg, where you’re photographing the parking lot of a Walgreens, if you have an advertisement for Walgreens sale on potato chips, if you have that text colliding, literally, with a description of Lee giving the order to retreat.  Those contemporary collisions are interesting to me.  Or the one with gas stations and the price of gas, and the ads for vaping and the e-cigarettes.  You get very contemporary images and text colliding with text about Sheridan’s men or this troop brigade or that troop brigade.  That was interesting to me.

Also, the ones where it was really rural, and where I’m looking at the landscape thinking, “Gosh, this probably looks the same as it did 150 years ago.”  So, having both of those exist together in the series was interesting to me to talk about the way landscape has rapid change or how in some ways it has remained unchanged.

It’s such a great, visual way to place memory in the picture.  To have those words kind of hanging over it is a powerful image.

It comes out of a tradition in photography where people are interested in pointing the camera at a place that has some kind of historical or social/political significance.  But then, the challenge is always—how do you let the viewer in on the idea without relying exclusively on the text?  So you look at 20 photographs and say, “Okay, those are interesting photographs.”  And then, the text says, “Oh, X, Y, and Z happened there.”  Sometimes that can drive you back to the text to look at it, but that’s also been done.  So, this was a way of still engaging in that commentary but doing it in a more direct way, where the piece could be able to stand on its own and be a bit more self-evident.