Fake Candles at the Tomb: A Holy Land Reflection

We’d all like a Holy Land made in our own image.  I’ve just spent two weeks in Israel and Palestine and there are a few things I’d change.  Yes, ending the occupation and a two-state solution are on the list.  (More on that to come.)  But, less grandly, how about the simplicity of a church with an open tomb without stalls selling ‘Guns & Moses’ T-shirts just outside the door?

Early on a Sunday morning, I walked the Via Dolorosa past Crusader churches, Byzantine arches, Mamluk stonework, and mass production-era kitsch.  I ended up at the Edicule of the Tomb, the recently-restored shrine in the Church of the Holy Sepulchre marking the spot where Jesus’ body was taken following the crucifixion.

Waiting with the polyglot pilgrims of a hundred points of origin, I felt the power of the place, but I couldn’t help being distracted by the huge candles at the entrance of the tomb.  Highly ornamented, twice my height…and topped by lightbulbs.  It looked like something your Aunt Lulu would construct from a kit she got down at the Hobby Lobby.  (Though it should be noted that the bulbs were of the high-efficiency LED variety.)

I touched the rock slab of the tomb—the impact of which was not diminished by the muffled cursing of the man ahead of me when he bumped his head on the low entrance.  Then I headed to a beautiful prayer chapel where I found the silence I craved.

In the chapel, you could hear the shuffling and muted conversation of tour groups, the chanting of monks, the rhythm of a familiar prayer.  Incense filled the air, an olfactory reminder of the beauty of God’s sacrificial act in Christ.  A riot of iron sculptures depicting the stations of the cross lined the wall.  Behind the eucharistic table, a blue mosaic of tile formed a fitting backdrop for a globe—the world summoned and surrounded by God’s grace.

We didn’t deserve this place, this church, this peace.  Just days before I met with an Israeli police spokesperson who had been at the scene of 48 suicide bombings during the Second Intifada, the memory of which is not cast away like the shoes he had to discard after each one.  One day earlier I met with a Palestinian woman of East Jerusalem who doesn’t know how to describe her nationality.  Israel, which annexed her neighborhood but sometimes treats her like a foreigner or a potential terrorist?  Palestine, which only exists as a profession of nationhood?  Jordan, the country on her papers, but which hasn’t ruled here since before she was born? 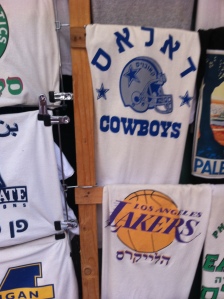 We pray for the peace of Jerusalem, as the Psalms prescribe, but any peace we can glimpse is tawdry, contingent, messy, rude, conditional—like the uneasy truce between the seven Christian groups that stake a claim to this church.  Ethiopian monks squat on the roof to preserve their foothold.  Fights break out from time to time between others.  And all the while the masses come and take their photos, genuflect at the sites, kneel beneath the table to touch the rock of Calvary, wonder what trinket to take back home.  Perhaps an olive wood Jesus?  Some Dallas Cowboys gear in Hebrew?

I tried to settle my mind.  My life is no less distracted than the street.  My attention wanders.  My enemies plague me even here.  “The harvest is past, the summer is ended, and we are still not saved.” [Jeremiah 8:20]

Jesus meet me here.  This holy land teems with the violent, frivolous, stupid things we do.  And yet children play in the streets, couples smile at one another, pilgrims stare wide-eyed in wonder as the guide ahead waves a flag to keep them from losing their way, spices fragrance the air, a neglected cat finds food left on a stone wall by an unknown hand.

There is light in this chaos.  Brilliant light like the burning sun of the Judean desert.  True, sometimes it’s mounted to a fake candle and needs to be replaced every 5-7 years.  But light.  Light which burns through and burns on to reconcile all things.

4 responses to “Fake Candles at the Tomb: A Holy Land Reflection”