What You Can Learn from 3 Hilltops: West Bank Edition 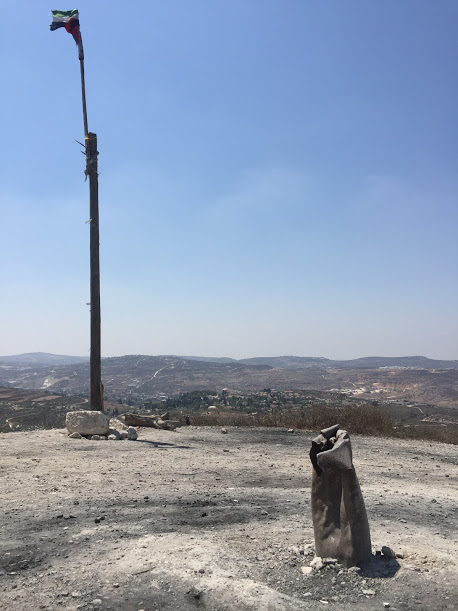 On the highest point in Sebastia, where a Roman Temple, the Northern Kingdom’s palace, and innumerable pagan holy sites once stood, there is a ramshackle wooden flagpole sporting a small Palestinian flag.  Or at least there was last week when I visited.  Locals report that the flagpole is the frequent target of attacks in which Israeli soldiers or others come to knock it down, its presence being an offense to the Israeli settlement on the next hilltop over.  Invariably a new group of youth will sneak up to the top of the hill in the dark of the night with a makeshift replacement, risking detention in the process.

So it goes on the hilltops of the West Bank.  Where once the kings of Judah and Samaria slipped off to engage in illicit worship, (like old King Ahaz, who “sacrificed and made offerings on the high places, on the hills, and under every green tree” [2 Chronicles 28:4]), now statements are being made. Israelis and Palestinians know the high ground is the landscape of power and they are staking a claim.

Southwest of Bethlehem, Daoud Nassar is the Director of Operations for his family farm, which is scattered over 100 acres on a hill with an enviable view.  Standing in Daher’s Vineyard, as the farm is known, you can see terraced landscapes, olive trees, and three Israeli settlements ringing the property his grandfather bought in 1916.  Nassar’s family has the papers to prove their long-standing claim to the property, a claim they have asserted from the time of the Ottoman Empire through the British Mandate and Jordanian control up until the present.  Even so, they have been fighting with Israeli authorities to keep their land, which has no access to water or electricity and which can only reached by car via a circuitous route around the settlements.

Nassar has made a demonstration camp out of the property.  On the day we visited, a group of New Zealanders were working projects, some of the 7,000 or so international visitors who come to the site each year.  Forbidden to build new permanent structures, Nassar’s family has created a Tent of Nations out of caves and cisterns.  It’s part environmental education, part non-violent resistance, and part 1960s-era Christian commune.

At the entrance to the farm a carved rock declares, “We refuse to be enemies.”  It’s a statement of the philosophy of the Tent of Nations.  Despite daily indignities, such as being harassed by people in the settlements for the behavior of the farm’s bees, the site persists as a witness. They’re still there on the hilltop and they will remain and keep fighting for their heights through legal means.

West of Ramallah, the bustling, de facto capital of the Palestinian Territories, a city has risen on another mountain.  Rawabi is the dream of Bashar Masri, a Palestinian developer who has pulled together $1.4 billion in investments to build a new city.  It’s a place that would seem at home in the Western world.  Shops like Mango and American Eagle sell up-to-the minute fashions in an outdoor mall.  Apartments hug the hillside, housing the first 4,000 of the hoped-for 40,000 residents.  A 12,000 seat Roman-style amphitheater welcomes big name musical acts for concerts. Families come in for the day to picnic and rent four-wheelers.

For all this, Masri has had to deal with a myriad of obstacles.  Despite being in Area A, the Palestinian-controlled zone of the West Bank, water and road access had to be negotiated with Israel, which controls the zones surrounding Rawabi. An inadequate two-lane road connects the city with the road to Ramallah. Site workers have had to deal with harassment from nearby settlements.

On the other hand, some Palestinian leaders have decried the use of Israeli products in construction.  Activists in the BDS [Boycott, Divestment, & Sanction] movement claim that such cooperation “normalizes” the occupation of the West Bank by Israel and weakens the resistance that Palestine needs to show in its struggle for true self-determination.  Others believe that the very unremarkable nature of life in Rawabi is an affront to the suffering of other Palestinians whose daily lives are marked by repression and constriction.

But why shouldn’t there be a place where Palestinians can draw a long breath in a city of their own?  Thousands of jobs have been created in the construction of Rawabi and Masri’s priority is to bring in thousands more.  Women have unprecedented roles in the city, including a cadre of female engineers that have led construction efforts.  And the city is providing schools that are among the best in Palestine.

What You Can Do With A Hilltop

When Israel moved into the Palestinian Territories following the 1967 War, the hilltops became the most visible sign of the occupation.  Israel took over old Jordanian military bases and created new ones of their own. Settlers, now numbering over 500,000, moved onto others.

But Palestinians have some hills as well. And though Israel worries about the security risk they would pose if the peace process ever results in an autonomous Palestinian state, the three hills I visited show some of the potential for what Palestine could be.  Those with connections to capital and a vision can build Rawabis.  A Tent of Nations can offer environmental education, pioneer new conservation concepts, and foster peacemaking and justice.  And in Sebastia, the biblical city of Samaria, an historical park could bring visitors and preserve the cultural heritage of the land.

All of this, of course, depends on a political solution to the ongoing struggle between Israelis and Palestinians, a solution that seems like a far-away dream given the leadership on both sides at the moment.  But in the meantime, while large car-dealership-sized Israeli flags fly on many a West Bank hilltop, others sport a Palestinian flag—either on makeshift timbers, or, as at Rawabi, on a large, metal pole at the summit surrounded by a statue of diverse people holding hands.

It’s true.  You can seek to kill peace from a hilltop.  But you can also build it.

Other posts about Israel and Palestine:

Letters to My Palestinian Neighbor: Yossi Klein Halevi’s Call Across the Wall

Fake Candles at the Tomb: A Holy Land Reflection

Also check out my book on the conflict: A Space for Peace in the Holy Land: Listening to Modern Israel and Palestine [Englewood Review of Books, 2014]