I was just getting ready to test out the brisket sausage when David Longoria sat down across the table from me as if we had known each other forever.  It was a slow Saturday in Everman on the southern fringes of Fort Worth.  The temperature hovered around 100 outside.  Inside the small restaurant with the red booths and scattered tables, it was comfortable but largely empty.  Too hot for BBQ, perhaps.

Myra, who had been so welcoming when I arrived, stood behind the register where I had placed my order, waiting for some more customers.  David’s father, Fred, walked in and looked the place over before sitting down with his newspaper.  David introduced me.

We had already been talking about Fred, the founder of The Longoria’s BBQ.  David had taken over the pitmaster role from him some decades back.  Fred was the one who moved the business up from around Granbury in the hopes that the planned I-35W project would bring a whole lot of customers right by the new location.  As it happened, the interstate went in a mile or so west, but the BBQ became famous anyway. 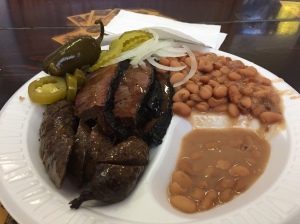 I don’t do BBQ reviews often on Heartlands.  In fact, I’ve only done one other—for the Skylight Inn BBQ in Ayden, North Carolina—and we all know the East Carolina version of BBQ is another animal altogether.  Texas BBQ means brisket, sausages, and ribs served up with raw onions, pickles, and jalapeños.  I grew up with the former, but, man, I do love the latter.

Longoria’s does not disappoint.  The sausages, all beef, are not as spicy as some, but they are sumptuous and worth the trip by themselves.  The brisket had a great blackened char which I adorned with just a little bit of their tasty sauce.  Pintos and corn on the side that did not detract from the main event.

I lingered over lunch with David since I never have had the opportunity to sit with a pitmaster before.  He explained the process and after lunch gave me a tour of the back forty where three blackened smokers sat for a well-earned rest after their culinary magic had been worked.  I tried a little of the brisket jerky and got a bag for my trip up to Archer City.  I also got a hat and a picture with Myra, David, and Elizabeth.

The Longoria’s BBQ has been listed in the Texas Monthly Top 50 BBQ joints in Texas and will be featured at the upcoming Smoked event in Fort Worth this October.  But don’t wait til this BBQ is all duded up in the Stockyards to come try it.  Make the trip out to see it in its natural habitat—a plain, honest family place in a town called Everman.  Tell them Alex from Virginia sent you.