Before I Take The Next Breath: A Sudden Response to General Conference 2019

No one should be held responsible for what she or he writes in the 24 hours after a cyclone like the one that just tore through The Dome in America’s Center. So I’ll hope you’ll extend me that grace as I offer, before taking the next breath, some initial thoughts and reactions to the Called General Conference of The United Methodist Church just ended in St. Louis:

So that’s what happened, but what does it mean?

For progressive United Methodists, the outcome was a bitter disappointment and there were numerous acts of witness by LGBTQ activists and their allies reminding the delegates of the pain felt by those who have not had their gifts and their sense of calling affirmed by the church.  My heart is heavy for laypersons and seminary classmates I know and love who do not feel welcome in our churches. I also grieve that the UMC will be defined in the eyes of many, especially the young, more for whom it excludes than for whom it serves.

For traditionalists, the passage of a plan that reflects their understanding of the biblical witness regarding human sexuality was welcome. But many of my traditionalist friends were also despondent about the constitutional obstacles to implementing their plan and frustrated at the tactics of opponents who used parliamentary procedures to prevent amendments that might have fixed the constitutional issues.

What could everyone agree on?

A change to the denominational pension program. Delegates did pass two petitions by a large margin that put the clergy pensions and benefits program on more secure footing.

Beyond that, I think most people on the floor, observing from the risers, and watching by livestream would agree that our method of conferencing at the General Conference level is broken. It is hard to justify how this can be a good use of time and money. Whatever we shall become, a major reform of our polity will have to be part of it.

Finally, I want to lift up two praises and two sins for which we need to confess. First, the praises: 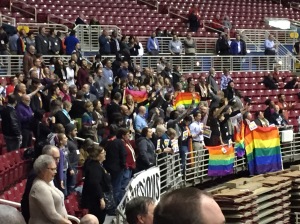 But now the sins to confess:

And finally, this promise from Jesus as he prepared for that Ascension after his resurrection: “Remember, I am with you always to the end of the age.” [Matthew 28:20]

There’s more to come and we’ll have more opportunities to gather, share, and learn. But it’s early yet. And I just want to breathe.

10 responses to “Before I Take The Next Breath: A Sudden Response to General Conference 2019”