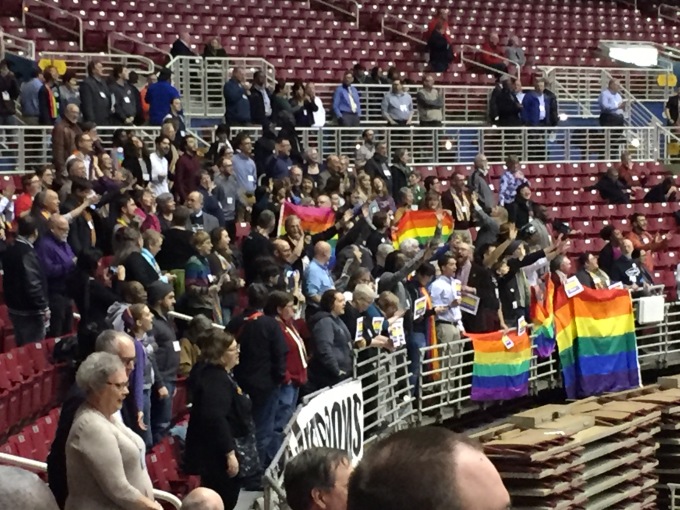 I talked to Dr. Ashley Boggan Dreff two days after the St. Louis General Conference ended. As the Director of United Methodist Studies at Hood Seminary and author of Entangled: A History of American Methodism, Politics, and Sexuality, she made a great conversation partner for trying to put what had just happened in some perspective. We talked about the history of the infamous incompatibility clause, the role General Conference plays within United Methodism, and the future of the church.

But first we had to talk about a place we’d both spent time, (she more than I), the United Methodist Archives and History Center at Drew University where she had been a doctoral student.

ABD: I worked there as a student and loved every single minute of just getting to kind of hold the denominational history and work with it and perhaps make it more accessible for people who couldn’t come to Drew. I absolutely love the archives. I try to get back there as often as I can.

Alex: Does that include getting to hold George Whitefield’s knuckle [which is part of the collection]?

The day we were there it was the Halloween season and so there was a pulpit chair used by Wesley with a scarecrow Frankenstein behind it. So, it was incredible.

Having discussed the important matter of Methodist reliquaries, I turned to her book.

Entangled was the most helpful thing I read before General Conference and it helped me to understand the denomination that I’ve been a part of my whole life in some really helpful ways. So, thanks for putting all the work into that.

I’m sure you’re feeling the aftereffects of General Conference like I am. I’m getting ready to do a presentation tomorrow and so I’m trying to put it into some semblance of order. One of the things your book helps me to do is to realize that chaos has been part of this United Methodist thing all along. Could you talk about what 1972 was like and how we got this language [that “the practice of homosexuality is incompatible with Christian teaching”] in the first place?

Yeah, as a historian I always have to say, if we’re going to look at 1972, we have to go a little bit further back.

To see how the language emerged you really have to look at what happened in Southwest Texas in 1970. The person who makes the amendment in 1972, is a man named Don Hand. (They’ve written an article about him and where he came from in Methodist History,* which is a journal published by the archives.) What we know about Don Hand is he was in Southwest Texas and he was nominated in 1971 as a lay delegate for the first time.

The reason that he’s nominated is that he essentially came to the defense of Bishop Slater, who was the bishop of Southwest Texas at that time. [Hand] defended him against gay rights activists who were disrupting the annual conference because of Gene Leggett.

Gene Leggett was a minister and ordained elder in Southwest Texas. In 1970, in the sentence of a fellow clergy person whose credentials were being revoked for having an affair with a woman, Gene Leggett stands up and says, “We can’t take away his credentials for doing this, it’s not against our Book of Discipline.” And he admits to also having an affair, but his was with another man.

This is all happening in 1970, 1971. We start to see at the annual conference level, people coming out as ordained clergy and their licenses being revoked, despite it not being in the Book of Discipline yet. That’s what gets Don Hand elected as a lay delegate,—it was his defense of the bishop in the chaos that was 1970 & 1971 Southwest Texas.

So, when Don Hand gets to General Conference in 1972 and he hears this report that has the Social Principles in their original form and he hears the statements that “homosexuals no less than heterosexuals are persons of sacred worth” and that their civil rights need to be insured, he’s coming from this context where that hasn’t been the case. There had been a lot of support for revoking Gene Leggett’s credentials because he was gay. From what I’ve heard about the tenor of the floor at the 1972 General Conference, there seemed to be a lot of surprise at this statement and how it was written, how open and affirming it was of the gay community. That hadn’t really been discussed by the delegates before.

The book talks about the New Morality [which exhibited more openness to homosexuality]. It talks about the Commission on Religion and the Homosexual. But all of that was happening in local churches and largely in urban churches. The New Morality was a denominational ethic that you could find in various publications, but you could rarely find it being talked about in churches, aside from Glide Memorial [in San Francisco]. A lot of things happen at Glide that don’t happen in other churches.

All of this going on and so when the Study Commission presents this language in 1972, it’s seen as so almost radical by the majority of the delegates that they spend six to eight hours discussing the one paragraph.

Don Hand gives an interview a couple of years later and he describes a prophetic moment where he didn’t know the words that were coming out of his mouth but he knew that they were directly from God and that they were the words that would help guide the church forward. That’s when he comes up with changing the period [at the end of the paragraph on human sexuality] to a comma and inserting “though we do no condone the practice of homosexuality and consider this practice incompatible with Christian doctrine.”

He just come up with that language on the spot?

So that’s kind of how the language originally gets written in and it’s accepted by the healthy majority and it kind of ends the debate. After Don Hand says that language, there’s one amendment to his language and that’s to change ‘doctrine’ to ‘teaching.’  Since we can’t alter a doctrine, we can’t call this a doctrine. So, they changed doctrine to teaching and then it’s supported.

Click here for Part 2 of my interview with Ashley Boggan Dreff on Heartlands.